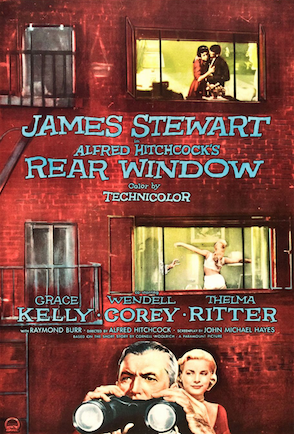 Rear Window is an Alfred Hitchcock thriller centered around a photographer, LB Jeffries (played by James Stewart), who is confined to his apartment in a wheelchair due to a broken leg. Having nothing better to do, he spys on his neighbors through his great big window looking out into a city courtyard. Even if it has a very strange poster, Rear Window is a very excellent movie. It’s got great acting, sound editing, and of course it’s got that great big courtyard set. But what really makes the movie stand out is its framing. Almost every shot in the movie either takes place in Jefferies’ apartment or is taken from his apartment window. The limitation of the framing and stationary setting not only helps to make every shot in the movie unique or clever, but it also adds greatly to the suspense seen in later parts of the film. The movie takes advantage of the fact that its main character is a photographer by utilizing his point of view through one of his cameras when close up shots of his neighbors are used. This movie is such a classic because not only is it very enjoyable and very 1950s, it’s also very creative and suspenseful. Rear Window feels like one of those movies where you notice something new every time you watch it.

A cinematic element of our study that Hitchcock used in an especially interesting way would be, in my opinion, the sound. Except for the theme in the opening credits, all of the sound in this movie is diegetic. Diegetic sound is sound that is happening in-universe: dialogue, sound effects, music playing on a radio or on TV in the movie, etc. Most of the sound in Rear Window comes from the noises of the neighborhood and the city. There are cars driving past and people talking to each other. The fact that there is no score in the traditional sense helps to add suspense to scenes where there is almost no sound at all. None of this is to say that there isn’t any music in the movie. Jefferies conveniently has a musician for a neighbor, and people’s radios can almost constantly be heard in the background. The use of diegetic-only sound helps to make everything seem so much more real.

If what I think you mean by ‘theme’ is correct, then a strong theme in this movie would be the morality of spying on people or concerning yourself with someone else’s business. Jefferies, his girlfriend, and his physical therapist all work together to try and prove that Thorwald murdered his wife. Sure, they get a murderer arrested, which is usually considered to be a good thing (arresting murderers, not killing people), but they do it by invading his privacy and illegally entering his home. The fact that yourself as a viewer are probably going to have conflicting ideas about the ethics of what Jefferies and his friends are doing also adds to the suspense of the plot and events. Overall, I really can't recommend this movie enough!! 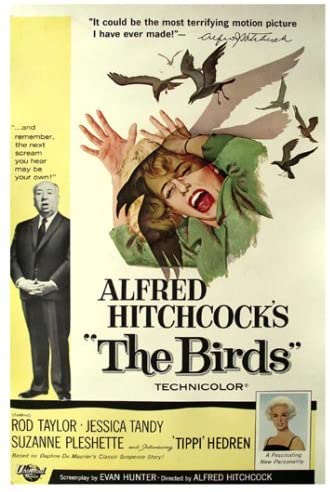 Overall, I enjoyed the movie a whole lot. I loved the costumes and the cars they were driving around in and I liked how the technicolor dyes would hurt my eyes sometimes. All of the bird attack scenes were freaky and the filmakers really took advantage of sound effects to create a chaotic feeling and atmosphere. I really loved the end when Rod Taylor has to sneak around his yard to get to his car and all the birds are just menacingly chilling out. A good snack to eat during this movie would be bird seed. I really, really loved Suzanne Pleshette’s performance as Annie Hayworth. She was simply so cool and calm for the entire time. I was terribly sad when her character died, she was just so pretty... Alfred Hitchcock, the director, uses the editing to really get across a creepy vibe. Most of the scenes in this movie really aren’t supposed to be scary at all, and they’re edited like any other movie. Most conversations simply go back and forth between the people talking, like you would expect. But when things are supposed to be creepy or off-putting, you can tell. There are lots of slow, drawn out shots of gathering birds and when they attack, the cuts between new shots are quick and jarring. It’s very effective. I would give The Birds ⅘ stars, I think. I don’t really know what I’m basing any of that on and I don’t have any sort of a five-star standard yet, but it was a real good movie and that one olive green outfit alone grants the movie a whole star in my eyes.

The Great Train Robbery is a silent film from 1903. It’s regarded as one of the first narrative movies, meaning that it tells a fictional, coherent story. In the first scene, the train robbers hold up and gag the trains station clerk! Already very intense! Then the robbers wait for the train to come to a water dispensary so they can climb on and wreak havoc. Once on the train, they cause commotion and exchange gunfire with another worker. The bandits blow up a safe and take whatever was inside of it. Then the robbers head for the engine to fight the engineers and really take control of the locomotive. Now that the robbers are in control, they’ve stopped the train and have forced all of the passengers outside, killing one man who fights against them. The bandits take their loot and the train engine and drive off to where their horses are waiting for them. Meanwhile, the train station clerk has recovered consciousness! The clerk goes to a local party, for some reason, and tells the partygoers what happened. The party goes out to chase down the train robbers, successfully killing them and getting back their stolen loot. The final shot is of one of the bandits shooting a pistol directly into the camera.

This film helps up to appreciate the art of filmmaking by showing what people were able to accomplish 118 years ago with relatively limited technology and little to no precedents for how to make and shoot a film. Unlike most modern movies, The Great Train Robbery doesn’t go into the lives of its characters and why they’re all flawed human beings, or what have you, and it doesn’t have to. It’s called The Great Train Robbery. It’s about a train robbery. It delivers! The film doesn’t have much going for it in the way of compelling dialogue, a good score, and fun sound effects but you can’t blame it because The Great Train Robbery is a silent film. Some scenes, like the one in a train car, use double exposure to make it appear as though the set is zipping down a railroad track. My favorite special effect is where they throw a dummy off of a moving train. One very exciting shot has the camera bolted to the top of a real train car, and a fight on top of the tender!!! The film also employs a good number of long takes, continuous shots with no cuts, shot from a distance but this is probably less of an artistic choice and more due to the fact that it’s a lot easier to just keep your camera in one spot and let your actors run around on the set for take after take after take. The nearest thing to a close-up shot in the movie is the final shot of the robber shooting into the camera. This specific shot is very famous and is referenced all the time, and for good reason! It’s very cool and scary!!!

Of course, being a modern kid, there were times when the lack of dialogue, music, and sound effects made for sluggish watching. But The Great Train Robbery still manages to be plenty entertaining. The action is exciting on its own and when the movie was first playing in theaters there would most likely have been someone playing a suspenseful track on a piano off to the side and below the screen. I hope that in this class we get to watch more silent movies from the next two decades in that era of films. In the end, I think I’d give The Great Train Robbery a ⅗. It was enjoyable, even by today’s standards, so I can imagine that audiences of 1903 would really have loved it. Maybe if I could somehow be able to watch it with the accompanying piano score that I’m sure would have played along with the film in the theater, it would have really added a lot to the viewing experience. All in all, The Great Train Robbery is a cute little movie, and a good Western.